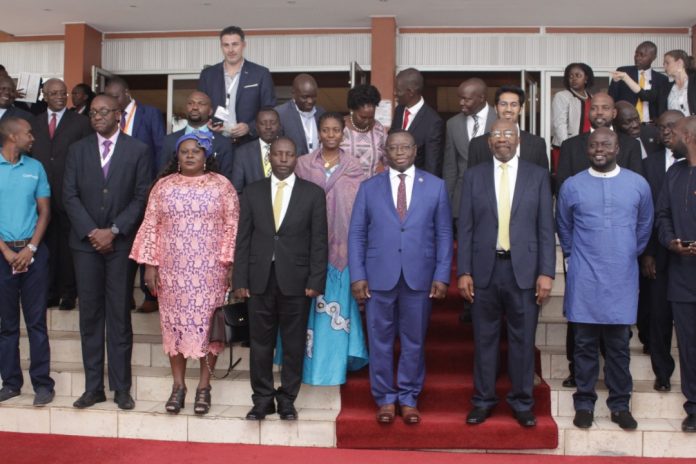 The second edition of the Africa Blockchain Conference drew to a close yesterday, the 4th of July, at the Kampala Serena where over 3,000 people gathered for the two-days to discuss and exchange ideas on the 4th Industrial Revolution.

Under the theme ‘’Africa 4.0:  Preparing Africa for the 4th Industrial Revolution’’, delegates comprising of the public and private sector, experts and leaders from global technology companies, entrepreneurs, innovators, students, youth and government representatives including the President of Sierra Leone, HE Julius Maasa Bio, the Prime Minister of Uganda, Rt. Hon. Dr Ruhakana Rugunda, the UAE Minister of State for Artificial Intelligence, HE Omar Sultan Al Olama and Sophia the Humanoid Robot, discussed topics such as;  Africa’s readiness for the 4th Industrial Revolution, Fintech, payment systems, and digital financial services, the future of work and education, SDGs and technology for impact.

Various speakers highlighted the need to use Blockchain technology and Artificial Intelligence for the development of Africa and society while making sure that we prepare for the future and most importantly the future generation.

“If you teach students of today the same way you taught yesterday, you’re actually robbing them of a good future,” said Dr Ramathan Ggobi, a lecturer at Makerere University Business School, noted that there is a need for the responsible authorities to revise the curriculum to enable students to learn things that will work with the evolving technologies.

“What will the world of 2030 look like? The education system today must prepare children for a world that’s different from the one they’re living in today, to solve problems that don’t exist today,” commented Dr James Magara while speaking during a panel discussion on the “The future of work.”

During the panel discussion on the case for a Pan-African 4IR strategy,  on the evolving digital world, Edgar Kasene, the CEO RetroRabbit, South Africa noted that; “Digital is not a buzz word. Society is gradually but surely moving away from the physical touch points. The way we consume has changed to digital.”

On emerging technologies, Kwame Rugunda, the Chairman of the Blockchain Association of Uganda, observed that; “Africa now has the greatest opportunity to leverage emerging technologies to facilitate the African Continental Free Trade Area, the largest free trade area in the world.”

The Keynote speaker, the Sierra Leone President, HE Julius Maasa Bio, highlighted that; “This transition to digital must be agile. It should be developed within the vision of what makes Africa and that defines our place in the 4IR. Emerging technologies, including the Internet of Things (IoT), virtual reality and artificial intelligence (AI), are enabling societal shifts as they systemically affect economies, values, identities, and possibilities for future generations.”

Representing the president of Uganda, the Prime Minister of Uganda, Rt. Hon. Dr Ruhakana Rugunda noted that; “We Believe that emerging technologies will shape the way we interact in the future. We must ensure that young people are at the forefront of this revolution.”

Talking about how Artificial Intelligence has improved human lives, the UAE Minister of State for Artificial Intelligence, HE Omar Sultan Al Olama, said that; “It used to take 6 minutes to diagnose TB in the UAE. Now with AI, it takes seconds. We can deploy emerging technologies from the UAE to Africa so we can share benefits from 4IR. Mutual collaboration will be key for sharing solutions that have been tried and tested in sectors like trade.”

Among other highlights of the Africa Blockchain Conference 2019, was Sophia, the Humanoid robot who delivered her speech and had a discussion with delegates via teleconference. Speaking on whether Artificial Intelligence will replace humans, Sophia said; “Human characteristics like creativity and compassion will never be replaced by machines. Everyone wins when humans and robots use their unique skills to work together.”